Ever thought about getting married amongst the olive groves or on a beach looking out to the Ionian Sea? Is it your dream to have Greek musicians playing bouzouki whilst you dance the night away underneath the stars? Well we can help you make this happen especially as we know first-hand what it is like to get married on one of the Ionian Islands.

In 2015, we got married on the beautiful island of Paxos. We chose to have a ceremony at the Gaios town hall and with the help of wedding planner Samantha Dasilva our day was perfect. After the ceremony our procession of 120 people walked the waterfront of Gaios following a small band of Greek Musicians, this moment was the favourite of many of our guests and it really felt like we were experiencing that Mama Mia wedding from the movies.

We arrived at the end of the harbour to have drinks and nibbles at one of our favourite spots, Porto Vecchio. After throwing the bouquet and mingling with guests we left on a speedboat to head to our reception. We organised for two coaches to take our guests onto Bens bar where we would have lunch and party!

As we motored toward Monodendri beach we could hear the cheers of all our family and friends standing by the water’s edge. We came up onto shore to the scent of Jasmine flowers and bay leaves that had been scattered across the decking leading us up to the bar where our guests sipped on cocktails and wine.

Ben, Effi and their team prepared a wonderful feast of fresh calamari, salads, Greek potatoes and lamb roasted on the spit. This was followed by a slice of cake on the cushions by the fire pit and dancing the night away to Ben’s great music!

There are lots great venues across the island but if you want something a bit more private or for less guests why not rent a villa to host your wedding day, here is where we suggest:

Lots of friends and family flew from around the world to attend our wedding and rented numerous Ionian Villas properties. Here are some of the guests favourites:

For helping you plan your wedding day we recommend using Samantha Dasilva a local expat who specialises in weddings and events. She can put you in touch with suppliers and help with the legal paperwork for your day. 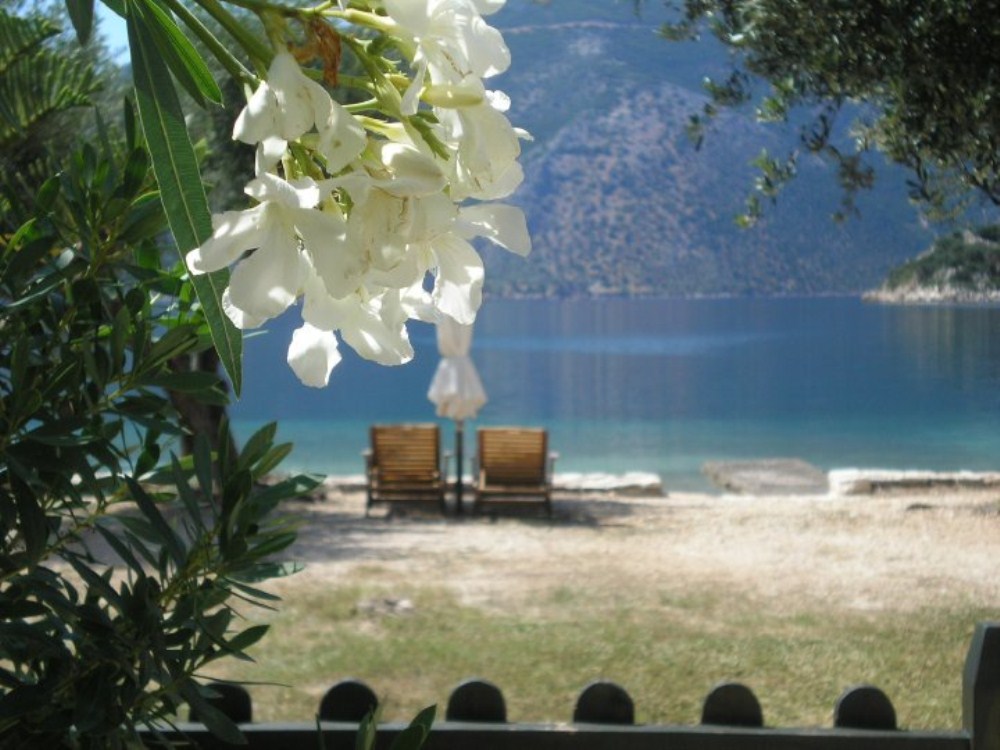 When planning a honeymoon many people will want a Caribbean beach destination. I wouldn’t want to put a dampener on this but here are some important considerations when comparing the Caribbean and a Greek island as a honeymoon destination:

Travel expense: a flight to the Caribbean costs a lot more than to Greece.

Travel time: A whole day is needed to get to the Caribbean & the same on the way back plus the ensuing days of jetlag lethargy.

Indigenous food: I have been amazed at how little food is produced and served at Caribbean resorts – there appeared to be a dependence on imports from USA.

Cost of staying at the water’s edge: usually very expensive in the Caribbean.

Island hospitality: it often requires inginuity and a bit of hard work to get to know native Caribbean islanders.

Caribbean sunsets: they tend to be early & are over very quickly.

Don’t get me wrong – I love the Caribbean and have had some memorable holidays there but to give you an example of why a Greek island should also be considered, have a look at Dexa Beach House on Ithaca

A flight to Kefalonia is needed (3 hours) and then a ferry to Ithaca (30 minutes). There are just two houses here – just 15 metres from a beach. Olive groves on either side of the houses.

Siestas come easily to the sound of cicadas and lapping waves. A small cantina at the other end of the beach serves local snacks and the nearby port of Vathy has waterfront tavernas offering a delicious variety of cuisine using local produce.

Anywhere you venture on Ithaca you will be greeted by a smile and if you have the time, locals will ask where you are from – many of them, like their forefather Odysseus, have returned from faraway places.

Summer sunsets on Ithaca go on and on and on. The evening light gives an intoxicating warmth to the colours of the sea and olive trees.

It’s all quite romantic.